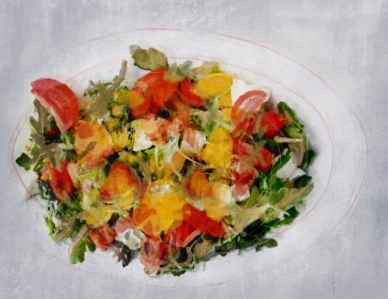 Confronted by a salad, the human mind will parse the arugula and contrast it with the heirloom tomato. The crunch of one, the squish of the other. The peppery tang, then the viscous sweetness. Isn’t this just like life, the mind will muse. Variety, sensation, some effort, some ease, some things simple, some things not. This salad cannot be an accident; the metaphors were meant. The cook tasted at each step, there is choice in the contents of the larder, intention in the motion of the knife.

WRITING IS A RIDDLE

There is a Cuban saying that God gives beards to those without chins. Which I’ve always wondered about. Does it mean that you always get what you need? Or that you only get what you can’t use? Is writing the voice you can employ when you can’t speak? Or is it that you can have something to say, or the skill to express it, but not both?

Big fish eat little fish. But what if the little fish don’t die? What then? Jonah made his home in a fish’s abdomen, Ira Gershwin said. Supposedly, Jonah stayed there three days and was perfectly fine. Fantastic Voyage was a movie about a miniature submarine and crew that cruised inside someone’s veins, using the nutrients in the blood for fuel. What if you can survive inside the behemoth, and let it power you instead? Of course, sometimes it’s not a choice of either eating the shit or killing the shitter. At the poker table they say to look around when you take a seat. If you can’t tell who the fish is, it’s you.

LOVE IS FOR ADULTS ONLY

Bodies can be cruel, she warned. I see how much you need love, she observed. I had a boyfriend for years who early in his life worked as a sex columnist and learned about women, she shared. We can be romantic friends, she offered. In another life we might have married, she wondered. I love you, she said. I love you, she says.

Years ago, I had a friend who worked at an online community service, a precursor to the modern internet. It was a family-oriented affair, but it had some content not suitable for kids. To restrict that content, he needed to devise a way to identify adults by posing questions on the screen, and he asked for my help. We thought of quizzing users about history, about old-time movies and music and art. None of those ideas would really work. In the end, we decided to simply ask if love lasts.

Michael Fuchs is a septuagenarian recent MFA in creative writing who spent decades on Wall Street while juggling a separate career as an actor in the professional theater. He was born in Cuba, so Spanish is his first language. His writing has appeared in the New York Times and other newspapers, and he currently has work forthcoming in Atticus Review. He lives on the seventeenth floor of a building that overlooks the Philadelphia Museum of Art.