You think you know how this will end. It’s some morning after it all happened. It doesn’t matter how long ago it actually happened, but what does matter is that this is the morning when you’re ready to move on. Turn over a new leaf, as they say. Before now, you hated that saying and whoever would ever say that in the first place, but sometimes a cliché becomes something real again. 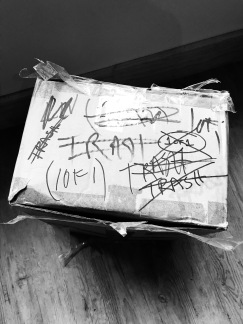 You’re at the “TRASH,” but it’s not actually trash or a trash can or any variation thereof, it’s a cardboard box that’s sort of closed, but sort of always opened, and on each side it reads “TRASH,” because it’s full of the shit that you kept, remnants of him, and you don’t know why you kept it, but at the time it seemed like the only rational thing to do and at the time it seemed to prove something. (That word “seemed” is always a mirage.)

– Ticket Stubs (The Phantom of the Opera: you hate the opera, but you thought he thought you were artsy or something like that, so you told him you wanted to go, but really you just wanted to fall asleep with him somewhere in public to see how he might hold your hand and if he snored or not (your palms smeared together so hard it was like you were making love, and, no, he didn’t snore); movies: mostly action or drama flicks at Carmike Cinemas, and there’s a stack of them, and you two had your routine of smoking a joint before any and every movie and you snuck in a plastic bag full of stovetop popcorn and four Natty Lights—two for each of you; sporting events: whatever, you’d rather watch porn or reruns of The Golden Girls)

There’s more shit. Piles of it. You sift through and wonder how you two ever lasted that long, but then you find something at the bottom of the box that’s now really just a box because it’s almost empty and the trash part of it is lying on the floor all around you.

The something is a manila folder. You open it (Again). Inside there are two pieces of paper. You try to read both, but you don’t get past CERTIFICATE on either. You decide to put all the shit back in the box and cross out the words “TRASH” with a black, permanent marker like you’ve done a few times before. (You think: what doesn’t kill you will make you stronger.)

Bradford Philen is the author of the novel Autumn Falls and the short story collection Everything is Insha’Allah. His other work can be found at bradfordphilen.com. A recent graduate of the University of Alaska Anchorage’s MFA program, he writes and teaches in the Philippines where he lives with his wife, son, and dog Bear.