“They tried a witch near where I grew up,” Christine told me. Long hair gathered back, arms and legs dotted with the aftercolors of unexplained bruises. “Most people don’t know about it. They dragged an old woman from her house and strung her up from an old elm tree.”

We sat on the dirty carpet of her living room, the air thick with smoke, beer cans accumulating on the coffee table. We didn’t go out anymore. The rare nights she made available were spent at her place, drinking in front of the TV.

She had played with me like she played with all the girls before me: intense and devoted, then teasing, then cruel, then indifferent. We were almost out of the hours she would spare for me. All that alcohol slicked the surface of her brain—nothing stuck. She retold stories, forgot things about me or things we’d done together. Mixed me up with other girls. When we were done I would merge into that vague haze of girls. She would forget the specifics of me.

TV masked the long silences. Usually she clicked and clicked through the channels, but tonight she found a rerun: an old documentary about Salem. 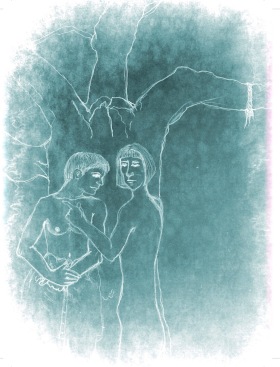 Most subjects elicited little more than a shrug or an eye roll, but witches—oh, the witches. She could talk about them for hours.

I fidgeted as the program’s time ticked down, hoping she’d give me the opening.

“It’s not that far,” she said when the credits finally rolled. “Where they strung up that woman.”

“We could,” she said, and I corralled her into my car before she had time to tell me she didn’t mean it.

We crossed a state line. Another, and another.

A chance, I hoped, to respark her interest in me.

She dozed. When she woke she fiddled with the radio or drank beer or made bland comments about the landscape.

She seemed not to notice that I needed no help navigating those dark wooded roads.

The sky had only just begun to blue when we arrived. We walked up a grassy green hill to the place where it happened.

At the ruins of the house, no one but the crickets and the frogs and the black, black birds. And beside the house, the twisted elm.

“They hung her from this tree,” she said. “They burned her body and buried the remains underneath.”

I knew that already.

We poked our sneakers into the soil, daring it to offer up evidence of what happened, some token of the woman who had suffered here.

“There were tests to find out if someone was a witch,” Christine said. “They threw them in the river to see if they would float.”

I knew that, too.

I knew about the other girls she brought here, how she spun the same wicked tale, making them melt and shiver. It was her talent, melting and shivering girls like us.

She walked in slow, narrow circles around me, smiling viciously. In her voice was an energy I had not heard since months ago, when she told me the same story, in this same place.

She didn’t remember bringing me here, back when I was fresh and new. There were too many of us to remember. That first time under the witches’ elm, the dirt ground into denim and the imprint of mulch on flat palm flesh—washed away by alcohol.

It hurt, at first. Before I realized what I could do.

“They looked for marks of the devil,” she whispered.

I could have said the words along with her. I slipped my coat and then my shirt off my shoulders, let her pretend to inspect me for something sinister.

I had learned what all the other girls before me had failed to: this place was a charm, a ward. Coming here, together, looped us back to a time before she’d had her fill of me. It reset something, for a time. An ever-shorter time.

I wondered if she felt the echoes of the past as she laid me down under the elm, if the damp and the way it clung to skin and sweat felt familiar, or if each time the feel of the earth surprised her senses anew.

Alyssa Claire Greene is an MFA student in Creative Writing at the University of Utah. She is a fiction editor for Quarterly West and an editorial assistant for the Lambda Literary Review. Her fiction appears or is forthcoming in The Southeast Review, Passages North, Gone Lawn, and Jellyfish Review.