On that late June day when his wife Mary came to bring him back home to Ketchum, Idaho, he believed it was Scott sitting by the window in the dayroom, though Scott was a good twenty years dead. And this man, going by the name George Saviers, already knew he would be dead soon, too. He didn’t absorb iron, they’d told him; and he believed that Kennedy and Hoover’s men were tracking not only his movements, but also his intimate musings, a condition which was unsustainable to him.

His countenance changed from depressive to as near gay as he’d been in a very long time, and he crossed to Scott with a strong, long gait, the way one does when approaching an old and unexpected friend. He’d been looking for someone to tell, someone to whom he could confess, and here he was. “Scott!” he greeted. The man at the window looked up, smiled and nodded. “Thank God it’s you and not that fucking pilot fish.” The man looked at him quizzically. “Dos Passos, that conniving prick!” He grabbed a chair and sat close to Scott’s ear. “Listen, we haven’t much time.” He glanced over to where the day nurse sat reading a magazine. “I need to tell someone, and you’re it, got it?” Scott nodded and George took a deep breath. “I didn’t write it,” he said. “It wasn’t me. I don’t know who it was, but it wasn’t me.” Again, Scott nodded as though he understood. “I really wish I had because goddamnit it’s brilliant!” The day nurse looked up from her magazine. “I’ve let everyone believe it was me for so long that it’s too late to correct such a thing, you know? You know, Scott?” Scott nodded. “To tell the truth, for a lot of years I thought maybe I had written it, only I’d forgotten from too many martinis. It could have happened that way. Art Clarke swears he remembers at Luchow’s, everyone at the table writing no more than six words on a napkin, and I won the bet, goddamnit, I won it! For sale: baby shoes, never worn – the most concise novel ever written!” The day nurse cleared her throat as the phone on her desk rang. “Listen, Scott, it’s good to get it off my chest, you know? But listen, Scott, don’t tell anyone, huh? Just between you and me, right old sport?” Scott nodded.

The day nurse approached. “Mr. Saviers,” she said. “Your wife is here.” The way she looked at him told him that she knew who he really was, and as he walked by, he swatted her ass. “Mr. Saviers!”

He turned to Scott and waved. “Hey Scott,” he called. “Next week is the 4th of July. When you see the fireworks in the sky, think of me.”

Scott smiled and returned the wave, and George’s body straightened as he pushed through the swinging door of the dayroom toward a waiting Mary, to become Ernest, once again. 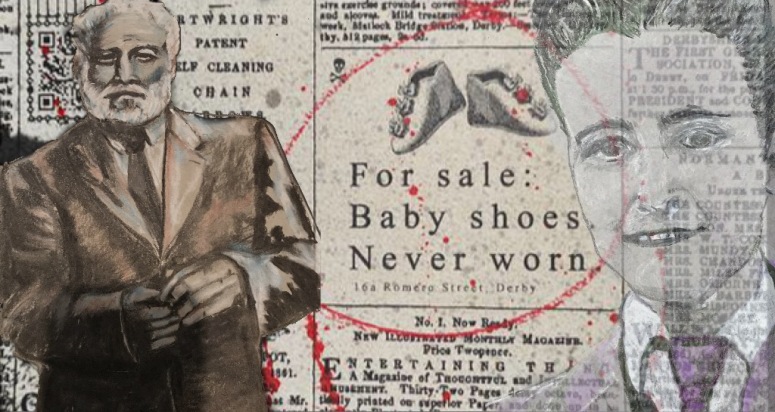 J. Edward Kruft received his MFA in fiction writing from Brooklyn College. His stories have appeared in several online and print journals, including Jellyfish Review, and Typehouse Literary Magazine. He enjoys mimosas at brunch. As a young child, and long before his religious recovery, he wanted to be a priest. He lives in Astoria, NY and Livingston Manor, NY with his husband, Mike, and their Siberian Husky rescue, Sasha. His recent fiction can be found on his Web site: www.jedwardkruft.com.