We got started late, but the afternoon’s quiet hike out at the sleeping volcanoes was only a handful of songs up the highway, quite the lovely drive. It took an eternity but it also seemed to take only a few hours to reach the top of the tallest hill. Took more than forever in breaths when we got there for sure. By the end that we reached, the Sun had been all over the sky, and it had had enough. We noticed the Sun had gone down at some point, but did not remark on it. We noticed that the ground under our shoes changed in some way, but did not remark on it. First crumbling sand, then solid rock, then more crumbling sand, like what’s found at the beach. At the crest, after a moment of looking around and rubbing our eyes we realized that night had come. That was moonlight, that shine on the rocks. But why was that light so bright? Because we’d climbed higher than the top of the hill and didn’t know so, because the Moon was only ten feet above us by the end. Because we learned the secret that the Moon doesn’t reflect light at all, that the Moon actually gives off light, a chalky white luminescence you can feel. Because the Moon, it turned out, was made by Westinghouse; it bore the logo on the side, that area that the world always thought was the Man in the Moon. The surface of the Moon was cloudy and translucent; we could see a massive light bulb inside there. Why was I so quiet? Because I knew saying anything at that moment would have snapped the delicate filament, that moment owned only by us. Why did we have to leave and come back down? Because to let ourselves get pulled away into the night by the Moon would have meant giving up all we knew. Actually, let’s not make the same mistake next time we’re there. Let’s let it happen next time. 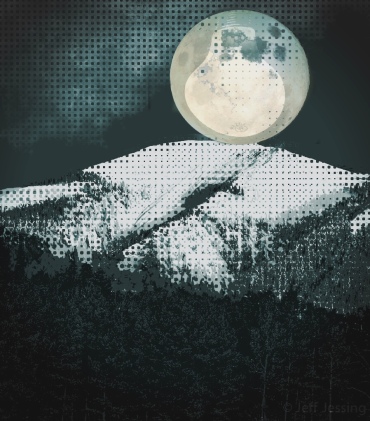 Rich Boucher resides in Albuquerque, New Mexico. Rich’s poems have appeared in Gargoyle, The Nervous Breakdown, Apeiron Review, Soft Cartel, Menacing Hedge, Cultural Weekly and Tinderbox Poetry Journal, among others, and he has work forthcoming in River & South Review, Broadkill Review, antinarrative journal and Street Poet Review. For more, check out richboucher.bandcamp.com. He loves his life with his love Leann.