The shrill voice of the mid-Saturday radio alerts begins on his phone. Noon, already? So far, there’s only been the announcer’s voice. No beeping siren calling them into oblivion, alerting the Pacific Northwest to the earthquake that will wipe them all away. They’ve made the alerts entertaining. Actors love to cut their teeth on this gig.

He silences his phone and turns to the trail ahead. He blinks when he reads the trailhead.  Bolt Your Home to Its Foundation. No way it says that. His mind is on that article his wife pasted to their fridge this morning. He gestures to his son, Kyle. Time to ride. 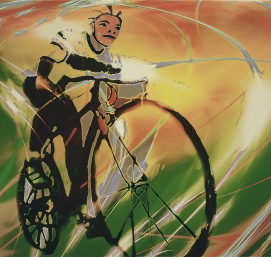 The log drop is tight. Ian’s rear wheels spit up dirt and he begins to negotiate the line he’ll take through the tree roots–which roots he can bunny hop over, which ones might provide the most air before he’ll hit the ground. He emphasized this part to his son. Look forward, anticipate your next move. Lift the bike up with you, take it down with you. With mountain biking, you have to be light and nimble, quick turns, tight rights, rocks in the road–all split-second decisions your mind must commit to before your body reacts.

The tree roots are polished, slick with use. He remembers hiking when Kyle was three. Kyle hit every root head on–face flat on the ground, chest, arms, and legs covered in mud. The kid was clumsy. Now, Ian breaks his own rule and looks back. He watches the boy descend downhill. Too fast.

“Choose a gear!” He can’t help it. Kyle swishes past him. A hand lift, a modest acknowledgment for his old man. Ian knows he should let Kyle go, let the kid make his own mistakes. He watches his son take that first turn and lift his bike over the rocks. Kyle lands upright and keeps moving. Good boy.

Another signpost. Redecorate for Gravity.

There’s this moment when you’re flying in the air and your nose prickles. Your hands loosen, your bike frame becomes part of your skeleton and you taste it. The wind sucks the earth through your teeth and there’s a tinge of pine and mud, honey, and flowers. The taste fills your belly, pulling you to the ground. It’s funny how when you are up and off-kilter that’s when the earth’s ache is most present.

They both slide to a halt at the bottom. The trail is wet, the mud thick like cake, and they are covered. Kyle’s cheeks are up, his lips almost smiling. This is all Ian will get. At thirteen, Kyle won’t admit to a goddamn thing. But, Ian can tell the boy is hooked. Mountain biking will be the drug in his life: a continuous thought. How will my wheels handle this?

Make a Plan for Your Family. The boy is off again and that’s when Ian feels the ground slip underneath him, it shakes vibrantly and he is on his knees. He expects the hard-panicked sound of a siren. But, there’s no alarm, only music. Nirvana. He laughs. It’s a cliché–an earthquake in Washington and you get Nirvana?  He keeps still, pushes his mind back, feels his left side shake more than his right. He counts ten, twenty, thirty, forty seconds. Done. Everything is the same. No branches askew, no mudslide, no rocks mislaid.  This time it is only his brain playing tricks on him.

His body pulses. My home will kill me.

His wife pulling the heads off shrimp, making a stew for their first sleepover. Her sharp nails running along his neck and back, her orgasm, the tightness in his chest and groin.

The radio alerts. A small running joke between the three of them, when you hear this you are toast. Toast like crushed his wife would add. Toast like burnt to a crisp his son would say.

What’s our plan, they say to each other.

Enjoy the Scenery on the Way Down.  Kyle is back. He moves his bike close to Ian and pats him in that condescending teenage-way. Ian wonders if he will get to endure his son’s attitude for a lifetime or if it will only be for another moment. His mind quiets and he moves through the next part of the trail, takes the roots at the tip of Kyle’s tires, and pumps his legs so he can pass the boy on that last turn before the loop starts all over again.

Shanna Yetman’s fiction has appeared online in Jellyfish Review and the Daily Drunk.  Her climate change flash fiction has appeared in the anthology by Alternating Current–Undeniable: Writers Respond to Climate Change. Her story, The Miracle Is to Walk this Earth, was the winner for the New Millennium Writings 39th Competition for flash fiction. She earned her MFA from the University of Maryland and recently attended the Bread Loaf Environmental Writers’ Conference.  She currently works as a Communications Specialist for Loyola’s School of Environmental Sustainability. You can tweet to her @YetmanShanna.