The Book of Strange Tales states,

In Shan County, the wife of Chen Wu, young with two sons, lived as a widow. She liked to drink tea, and protected an ancient grave in her house. Before each drink, she repeatedly made offerings to the deceased. Her two sons said, “In his old grave, how can that useless dead man know your intentions? We’ll dig up the man and take his body away,” but Chen Wu’s wife forbade it.

One night in her dream, the dead man said, “Though I have stayed here three-hundred years, your sons try to destroy my grave. Owing to your protection, I have enjoyed good tea. My bones decay in the sunken earth, but how can I forget that one good turn deserves another?”

The Book of Legends states,

Yu Hung from Yuyao went to the mountains to pick tea leaves; he met a priest pulling three blue oxen. The priest led Yu Hung to Waterfall Mountain, saying, “I am Danqiuzi. I’ve heard you are a connoisseur of tea, so I’ve always wanted to show you this mountain; it has a broadly-branched tea tree you can use. Later, in the future, if you have tea to spare in your cup, I beg you to give it to me.” Yu Hung kneeled and bowed to Danqiuzi, then entered the mountain’s valley. He never wanted for tea.

When it rained in the spring of 1828, I followed my master to Chiri Mountain. At The Temple of The Seven Buddhas, a copy of The Complete Book of 10,000 Jewels was brought down to me. I wanted to copy the “Record of Green Tea” section more concisely, but because of illness, could not finish.

When Suhong was my novice in the room for attendants, he wanted to know the harmonious balance of tea. He tried to copy the text, but because of illness could not finish.  Hence, during rest from meditation, I wrote the book for him.

I ordered my brush to finish the writing. Once work has begun, it should be finished. Why should only Confucianists have such discipline?

My temple may possess knowledge of the traditions for drinking tea as a Zen practice, yet the Tao of tea is not widely understood. Therefore, I copied the text and share it with reverence.

—Mid-spring, 1830, written with care by Resting Hermitage, ill, but practicing Zen, sitting near the stove, the land outside, snow-covered. 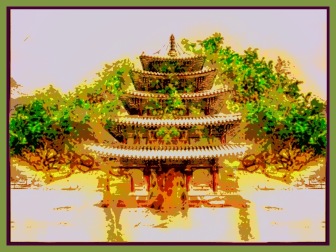 Ian Haight’s collection of poetry, Celadon, won Unicorn Press’ First Book Prize. He is the editor of Zen Questions and Answers from Korea, and with T’ae-yong Hŏ, he is the translator of Borderland Roads: Selected Poems of Kyun Hŏ and Magnolia and Lotus: Selected Poems of Hyesim—finalist for ALTA’s Stryk Prize—all from White Pine Press. Other awards include Ninth Letter’s Literary Award in Translation, and grants from the Daesan Foundation, the Korea Literary Translation Institute, and the Baroboin Buddhist Foundation. For more information please visit ianhaight.com.

T’ae-yong Hŏ has been awarded translation grants from the Daesan Foundation and Korea Literature Translation Institute. With Ian Haight, he is the co-translator of Borderland Roads: Selected Poems of Kyun Hŏ and Magnolia and Lotus: Selected Poems of Hyesim. Working from the original classical Korean, T’ae-yong’s translations of Korean poetry have appeared in Runes, New Orleans Review, and Atlanta Review.

Ch’oŭi (1786-1866) was a Korean Buddhist monk given a traditional Confucian education, making him a uniquely trained scholar of his period. Ch’oŭi is considered one of the first pre-eminent experts on the subject of green tea in Korea.