Use the transcripts of your online chats to inspire dialogue. Speculate how he may have behaved had this conversation been face to face. Would he reach out to touch you? Would his green eyes flash with lust? He is not yet yours, but you are free to assign him whatever desires you wish. Create a narrative from what was once uninspired chatter. But he can never know, he is not like you. You are free to submerge yourself in his words, in him, but you must do so alone.

Remember the hot stab of jealousy you felt when you saw him trolling for sex on one of those coldly accommodating websites. You gazed at the photograph on his member profile and the low, purring voices of all the men who would pursue him flooded your mind. You wrote to him just to make sure in that moment he was not writing another man. Use that pitiful desperation! Spread it across the page like thick, dark jam. Punish your readers with the sickening realization that if he indeed found another man to fuck, he wasn’t thinking about you. 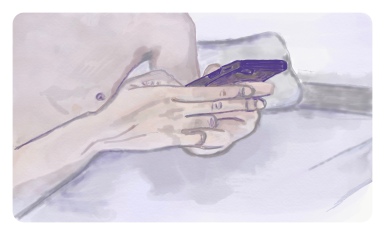 Recall with numbing shame all those senseless, endless, merciless messages you wrote him while you flip-flopped from one sham reality to the next after gorging on speed. Accept that your memories of his increasingly bewildered replies are forever dim and toneless. His repulsion at you exists in a vacuum. It’s a junkyard walled in glass–there’s no way in or out. You wasted so many words on him, manufactured mere noise. But you will not make that mistake now.

Of all the transcripts you’ve saved, there is one you believe mimics the structure of a story without any desecration from you. Your final “real” chat. You messaged him impulsively that night, before the speed had shattered your personality completely. He demanded you be honest with him. He spoke of the one time the two of you met in person and compelled you to revert to that same boy you were then. You succumbed. You confessed your pain and your loss, feverishly pounding the keys, a junkie for whatever he wrote next. Yes, this combat of wills makes a perfect story: opening hook, rising conflict, unexpected climax. When he confided that your openness aroused him sexually, gratitude bloomed inside you like a cancer.

You can only tell one person how this absurdly brief encounter touched you. You could perhaps call him. Maybe write him a message. But he is weary of your words. You wrote in haste, you wrote in panic. And now he wishes you to write no more.

This is not a story but this is the end.