When her husband died, Patti’s friends rallied, stopping by with casseroles and quick breads, inviting her out shopping or for coffee, invariably a hand resting on hers, little pats drumming her fingers, as each quietly but earnestly said, We wives stick together.

But this rally cry was short lived, forged in the momentary upheaval of loss and grief, and Patti’s friends quickly went back to their own lives and errands, their own desires to get back to normal.

Texts flew back and forth between Patti’s friends. Maybe we should put her on one of those dating sites. We all lose people. Now she’s just feeling sorry for herself. Who wants to try that new restaurant for lunch tomorrow? I’m in! Me!

They all agreed they had gone above and beyond supporting her in her time of need, and now it was time for Patti to move on and build a new life.

So Patti was left alone in her big house, kids long scattered to the coasts, their Golden Retriever having died the year before. She wandered from room to room, day after day, Bill lingering in every corner of every room. The Old Spice he’d always maintained was the best scent for a working man. Tiger’s Balm he’d rub into his elbows and knees before bed each night. Linseed oil on his workbench in the basement she’d breathe in, hoping to pull him back to her, while she stood waiting for another half-load to finish in the wash.

But those smells that kept Bill close to her slowly faded as the weeks and months passed, and Patti was left sitting in the rocking chair by the garden window, too tired with the sadness and longing that filled her to move. Everyone, living and dead, had faded away from her.

Then one mid-summer morning, her first summer without Bill, she woke to the Sun streaming through the bedroom window, warming her face, brilliant red and orange auras flickering and radiating behind her still-closed eyes.

This warmth surrounded her and spoke to her. She lay there, covers thrown off, feeling the heat on her shins, her thighs, her stomach, her chest.

The Sun told her to rebuild Bill, that his touch lingered on all they had acquired during their decades together, that those objects still vibrating with his essence would bring him back to her, that Life was not over.

Two walking stones near the zinnias became his feet. They were flecked with blue and amber glass, a little flashy for Bill, a simple man who wore simple earth-toned t-shirts most days of his life, but the Sun said Bill needed some flash.

She found two old milk cans for his legs in the storage shed. She welled up, remembering when Bill had brought them home from another Saturday excursion to an estate sale. He’d loved puttering around the makeshift isles of laid-out wares in someone’s expansive front yard, bidding sight unseen on boxes and crates overflowing with items that he would painstakingly thumb and catalog once back home. 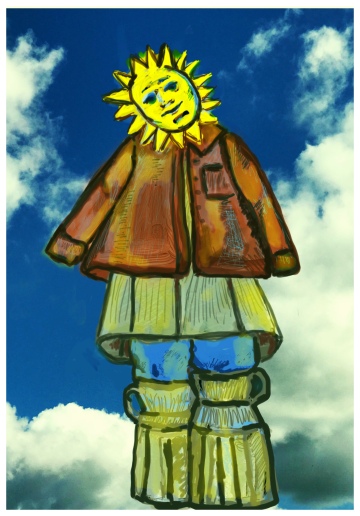 An old tire rim became his pelvis. Patti then hefted their patio table’s umbrella through the rim for his broad chest. She threw one of his flannel shirts over the umbrella and let the sleeves flap in the Wind, reminding her how he’d run outside, waving his arms to shoo off the blackbirds settling on the sweet corn. She smiled and told the Sun she hoped the Wind would never stop.

The Wind was listening and it whispered to her, Take the face of the Sun and make it Bill’s face. So she did. She unscrewed the bronze metal sun with the large happy eyes and big happy mouth from the privacy fence and tied it around the top of the umbrella pole with Bill’s old leather work boot shoelaces.

The Wind kicked up and flapped the flannel sleeves even harder. The Sun grew brighter and Bill’s face shined and sparkled in the light. They both said this new Bill would never leave Patti, that he would watch over her as she slept in their bedroom overlooking the zinnias, that he would always be healthy and strong. The Sun promised to keep him warm. The Wind promised to keep the blackbirds from pestering him.

Patti exhaled for the first time since Bill had taken sick. She sat down in the grass to rest, staring up at Bill’s handsome weathered face again.

Bill whispered, Where did you go? No matter. I’m so happy you’re back.

L Mari Harris lives in Nebraska, where cattle outnumber people 4 to 1. She’s ok with that. Follow her on Twitter @LMariHarris and read more of her work at www.lmariharris.wordpress.com.