Does a cheerleader who survives a traumatic brain injury deserve to be treated like the queen of England? Apparently, she does.

Does the sister of a cheerleader with a traumatic brain injury deserve to be banished to the basement and ignored? Looks that way.

I just scraped cockroach guts off my bare foot with an eyebrow shaper. Story of my life.

Now, does a ten-year-old boy who wears makeup to school deserve to be sent home? I don’t think so. Especially not if his cheerleader sister is at home in a minimally conscious state and his parents haven’t spoken to him in three days.

Have you ever tripped over a minimally conscious cheerleader’s feeding tube and got yelled at by a homecare nurse? I have. Twice.

Last night I dreamed I lived in the parking garage at the mall.

Okay, my little brother’s unibrow made him look like a Sasquatch so I talked him into letting me pluck it. But I took too much off and made him look permanently surprised, so I tried to fill it back in with a pencil. Does that make me a sociopath? Apparently my school counselor thinks so.

She’s not my sister. She’s my step-sister.

Six months ago at the lake, I saw my dad making out with my stepmom’s best friend. It was the fourth of July and fireworks were banned because of forest fires. Neither one of them has looked me in the eye since. 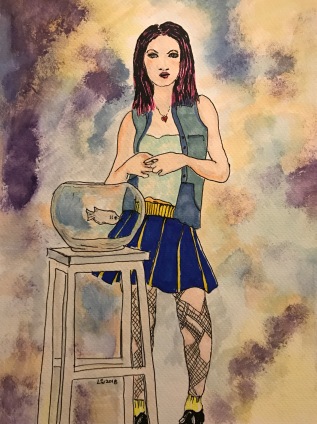 Six months ago, I was sad and bitter, so I went to the pet store and bought a fish.  Now I’m a sad bitch with a fish.

What’s one sure way not to cheer up a cheerleader who can’t walk or talk? Show her cheerleading videos. Brilliant step-parenting move, Dad.

Last night I dreamed I was being attacked by aliens.

Before her accident, I told my sister there was a guy on our block with cat whiskers tattooed on his face but she didn’t believe me. So today I brought that guy by to show her. Now I’m grounded.

You don’t even want to know what I heard my stepmom say to her online therapist.

Somehow, whenever there’s a fight at our house, the pastor from my stepmom’s church “happens to drop by” and gets invited to dinner.

Have you ever cursed in front of a pastor and a homecare nurse? I’m about to.

My stomach just made a noise like an old lawnmower trying to start.

Does a drunk driver who causes a cheerleader to get a traumatic brain injury deserve to go to prison for life? Apparently not, if they’re my stepmom’s best friend. Then they’re “just a good person who made a terrible mistake.”

Two kids at my school got suspended for drinking hand sanitizer. Seriously, what’s this world coming to?

That freaky cat man got my sister to smile though.  I swear I could bring her back to life if they’d let me.

My fish’s name is Charles Bukowski.

My dad gave me forty bucks and said not to tell my stepmom. I bet my brother five bucks they’d be divorced by Christmas. He cried, so I said I was only joking.

My poor little brother asked me how a person would know if they were possessed by demons. I told him to go ask our stepmom.

I mean, the kid just needs to feel like someone gives a shit about him.

Should I dye my hair pink again?

Once, instead of signing my name, I wrote the words “Burial Mask.” No one noticed.

I could shave my eyebrows completely off and get cat whiskers tattooed on my face and no one would notice.

I bought my fish a shiny gold castle for his aquarium, but he wouldn’t go near it. So I bought him a spooky wrecked ship instead. Now he’s happy.

Another kid at my school tried drinking organic hand soap and it just made him burp bubbles. I’m surrounded by idiots.

Seriously though, my fish is the only one who understands me. Wish everyone else would just leave us alone.

What’s the right way to cheer a cheerleader? The world may never know.

Gina Yates has written two novels and is exploring short fiction during the suspenseful wait for updates from her agent. She lives in Albuquerque, New Mexico, where in addition to writing she is the sole proprietor of an eclectic vintage clothing store. Her work has appeared in Ghost Parachute, Typishly, and Literally Stories. She is also the youngest daughter of the late celebrated author Richard Yates.