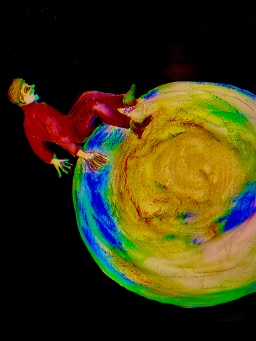 Once, I met a man who thought the earth was a still disc, like an unplayed vinyl record. The sky is just a dome above. I ask him if this means the heavens could collapse in on us. No, that’s absurd. I give him a second to rethink his response but he doesn’t take it. So I ask him why he believes this. I sit through four minutes of conspiracies before asking again. Why? He looks up, taking one deep breath before speaking slowly, as if I am an idiot. Flat earth means that we are wanted by the world. It was created for us. As it should be. And I understand because I am just as human as him. The earth flattens when you want to be known and needed by it. We part, both still watching the horizon, sunset curving down at the edges. He doesn’t see the line the same way. Neither do I.

Munira Tabassum Ahmed is a poet with work featured or forthcoming in Cordite, the Lifted Brow, Australian Poetry Journal, and elsewhere. She co-edits Hyades Magazine.