Tommy sits sidesaddle in the driver’s seat, his legs stretching awkwardly out into the empty parking space next to him. His hands wrap around a twenty ounce Coke while the “store closing” signs on the jewelry store flap in the breeze above his head. You’re wishing that you had your camera with you (though you know how much disdain Tommy has for your “pictures”), it’s just such a classic small town middle America image – that black and white Bruce Springsteen moment. You wish you could capture this dry wind, the early pink of the coming sunset, the dust in a fine film over everything, this quiet street as the town closes down around you. Tommy fumbles in his ripped jeans for his pack of cigarettes, packs one on his knee, and lights it while dusting stray tobacco from his faded Metallica shirt. The sound of an electric guitar being tuned careens down the street. Misspent Juice getting ready for their gig at Remington’s. It is an aggressively lonely sort of sound, echoing like this, each note pulled and stretched by the air’s contractions. 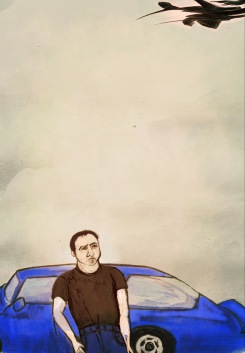 Overhead, two F-15s roar in tandem towards the air force base. “Shit, they’re fast” Tommy drawls, jealous of their speed. You’re thinking more of range – how far they could take you from here. Anywhere, almost anywhere.

Three more weeks. Three more weeks and you’re out of here, headed for college. You haven’t told Tommy yet. There’s just never a good time for it and you’d rather ride out any fun that the two of you still have left in this rather than watching him rage for the last weeks that you’re stuck together. For a second, you wonder if he will write you letters and then you laugh, kick the tire of his Firebird. He mutters something about you hurting his baby and takes another drag.

The wind whips cigarette butts and fliers for the just-ended rodeo in circles around the corner by the sandwich shop. It’s a beautiful little moment of controlled chaos, all of these remnants of another summer spiraling around – lifting, lifting and falling back hard against the sidewalk. You imagine how it would look through a lens.

C.C. Russell has published his poetry and prose in such journals as The Meadow, New York Quarterly, The Colorado Review, and Whiskey Island among others.  He has been nominated for the Pushcart Prize and for Best of the Net and is included in Best Microfiction 2020.  He lives in Wyoming with a couple of humans and several cats. You can find more of his work at ccrussell.net