Jackie set up her iPhone on a tripod at the end of the table and said, “started recording, Bella.” My voice increased in volume. I dumped splenda packets into my boyfriend’s water. The hostess had a funny name. I mispronounced it on purpose.

I ordered breakfast, but I wasn’t hungry (I was never hungry). The food arrived and Jackie carved a bunny out of her pancake. I wanted to make something too, so I made a teenage alien. 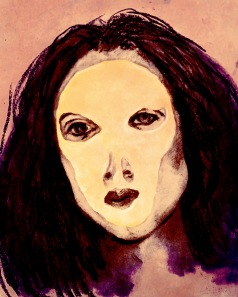 The pancake had a big forehead and a tiny chin and straws for braces and dots of butter for acne. My boyfriend dared me to put this extraterrestrial pancake on my face. Through its eyes, I saw the camera focused on me and knew this video had all the makings of a classic Bella upload: being goofy in public; pranking each other; me. It could get a couple hundred thousand views. Hopefully some more subscribers. An ad, if YouTube gifted me one (believe me, I needed an ad).

The bottom of the alien head splashed into a syrup pool on my plate. I did that fake YouTube laugh that I always do, the HAHAHA *snort* HAHAHA, and some lady shouted at me to keep it down. Jackie panned over to the lady, then panned back to me. Her eyes were as big as plates because she knew a fight would go viral. And I was about to march over there and smash blackberry jam into her hair and dump hash browns and egg yolks into her purse, but then I saw her daughter. She was maybe fifteen, only five years younger than me at the time and terrified: slumped shoulders; hands covering her eyes; slipping in her chair, trying to forget what her mom had done, trying to not think about what we were going to post online.

What really stopped me was her breakfast. A grand slam. Untouched. This girl had enough problems in her life. She didn’t need us to film her. I didn’t want anyone to film me when I was fifteen either. I was that girl who struggled to eat pop tarts and didn’t make eye contact with teachers and only had one friend who barely tolerated me. My mother was a loud mouth too, always shouting at me to not be so timid, always yelling at food staff, teachers, my dad. Making people laugh was a way I could get them to pay attention. To stop yelling.

I told my crew to keep it down. The camera was still on me, but it felt different, like it wasn’t a performance anymore. It felt like a documentary. A bad one. I told them to turn it off.

Jason Sprinkle is a writer and software developer in Austin, Texas and has work in Five on the Fifth magazine. Feel free to follow him on twitter at @jason_sprankle.