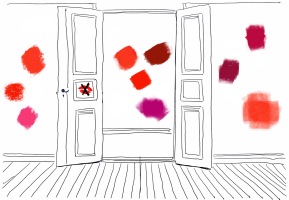 While Adam’s at work, Eve smears paint samples over the white walls of their bedroom. She tries Love Bite, which in the miniature paint can looks like roses, but on their pale walls makes her think of smashed mosquitoes. She tries Hickey, but it contains too much blue. She tries Smoldering, Flamethrower, and Inferno. Each streak is a lipstick shade. As happens at the cosmetics counter with every crimson hue that looks elegant in its slick tube, she thinks this is the one that’s going to change everything. Make her over. Thrust her into the after. But always, she is disappointed. In the rectangular mirror propped on the glass counter, she sees a hopeful smile slaughtered. Adam would say, does say, she’s beautiful exactly as she is and that their life together is beautiful. But Eve wants something more. Her name means on the brink, on the verge, on the cusp of something. Perhaps feeling dissatisfied is her fate. She’s a child asking, are we there yet? Adam is the parent saying, Look out the window. Enjoy the view. The view consists of the same green lumps over and over. Only the trees actually change. They’re smug with their taut buds blossoming into heavy, red fruit. Nothing ever changes for Eve. Not for lack of trying. She rearranges the furniture every few months, but there are only so many ways to arrange their furniture within this space. She’s cycled through the various configurations so many times now that she’s built up a kind of tolerance. She’d have to do something truly radical—affix the furniture to the ceiling, say—to feel something. If she could, she would. But she can barely push the furniture across the carpet on her own. Staring at those not-quite-reds on their bone-white walls, Eve tries to remember choosing this furniture in a store, choosing this house, choosing Adam. But she can’t remember a life before this one. It’s as if all these choices were made for her.

Michelle Ross is the author of There’s So Much They Haven’t Told You (2017), which won the 2016 Moon City Press Short Fiction Award. Her fiction has recently appeared in Alaska Quarterly Review, Colorado Review, Queen Mob’s Teahouse, and other venues; it’s been included in Best Microfiction 2020 and the 2019 Wigleaf Top 50. She’s fiction editor of Atticus Review. www.michellenross.com