The lipstick was small in his hand. He removed the cap and wound it up—deep peach-pink. He took my chin. For a moment he did nothing, nothing at all. Then he lifted my chin higher and slowly swept the lipstick across my top lip and then the bottom. He peered at my mouth, his brow furrowed, as he drew. The lipstick was creamy, smelling of musk and rose, and beneath that, chemicals, alcohol.

He folded a tissue and placed it between my lips.

I pressed down on the tissue and he took it away.

“Where did you learn this?” I said.

He applied another coat of lipstick, as slowly as the first. He was bent in front of me and I smelled the traces of shampoo in his wet hair and the starch of his white shirt.

I sat on the edge of the bath, holding onto the cold, thick ceramic with one hand. I stretched my other hand outside the cast and for the millionth time pretended my arm was not burning and itching beneath the plaster.

The bathroom was frozen. The floor speckled with tiny tiles, a repeating pattern in white, green and grey. Beside the medicine cabinet was a narrow window of mottled glass. The morning was still dark after eleven o’clock and the sun might never show.

My stomach swayed. I closed my eyes and next door Marianne Faithfull sang about rain falling on the ground.

He straightened. “Your makeup is perfect. You can’t cry today,” he said, his voice cracking on the last word.

He wound the lipstick back down and snapped the cap closed. He read the base of the lipstick. “Dolce Vita,” he said.

He took my hand and pulled me to my feet. 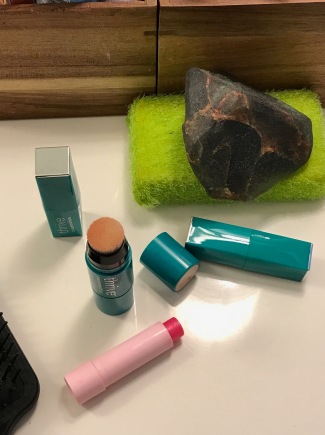 Melissa Goode’s work has recently appeared in SmokeLong Quarterly, WhiskeyPaper, New World Writing, Split Lip Magazine, matchbook, Blue Fifth Review, (b)OINK, and Jellyfish Review, among others. One of her short stories has been made into a film by the production company, Jungle. Her novel manuscript “What we have become” was selected by Random House in 2016 for a fellowship with Varuna, the National Writers’ House in Australia. She lives in Australia. You can find her here: www.melissagoode.com and at twitter.com/melgoodewriter.