“Ravioli?” I say to Laura as I take the horseradish from the fridge. I grope for the right words, but even though they glide gracefully through my thoughts to my lips, when I speak, they scatter like startled birds. I try to say horseradish. Out comes ravioli.

Dr. Wild says he’s never seen a case like mine. He wants to schedule a brain scan, but I’ve been putting it off. 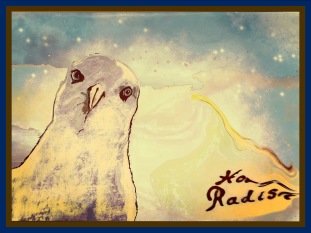 Adverbs were the first to flutter and jumble when I talk. That wasn’t so bad. Rather than say the wrong one, I omit them altogether. Now my speech is more efficient though a little bland.

My condition scrambled prepositions, conjunctions and interjections next — all at once in a single bucket. One day I said to Laura “Crikey!” (I’m not Australian) “I think my condition has scrambled prepositions, conjunctions, but interjections all at once on a single bucket.” She understood. As they say, sometimes the medium is the message.

It was more annoying when I couldn’t say the adjective I was thinking.

“Laura, could you hand me my blue shirt?”

My wife held out my blue shirt.

“Get your own damn shirt.”

See what I mean?

My ability to verbalize the right noun flew away recently and made communication even more tedious. I’ve tried scribbling notes. One day I thought spoon and wrote fork. That wasn’t far off so I tried to outsmart my strange malady. Because I needed a spoon, I wrote fork and handed Laura the note. “You want a poodle?” she said.

I smear the horseradish on my veggie burger and hold up the jar. “Sure you don’t want ravioli?”

Laura shakes her head. “Jeffrey, you’ve got to have that brain scan.”

Laura doesn’t miss a beat. “I know you hate hospitals, Jeffrey, but we can’t put off the test any longer.”

On the way to my appointment, we pull over at the shore and take a short walk to relax. A clam clatters onto the rocks at my feet and opens like a mouth screaming. A gull swoops down and rips out its tongue. Laura pretends she doesn’t notice.

… The brain scan reveals deterioration in my frontal lobe. The worse news is the condition is spreading to my parietal. Soon I’ll hear incorrectly what others are saying and won’t even discern the right words in my own thoughts.

As Laura drives us home from the hospital, no one speaks. What’s the use? Even verbs elude me now. My wife reaches over and squeezes my hand. I try to tell her how much I care about her, but instead say something about painting her with moonlight. I’m not sure where those words come from, but they ring true. I can only hope Laura remembers them after everything is seagulls and starlings.

David Henson and his wife have lived in Belgium and Hong Kong over the years and now reside in Peoria, Illinois. His work has been nominated for Best Small Fictions and Best of the Net and previously has appeared in MoonPark Review and other print and online journals. His website is http://writings217.wordpress.com. His Twitter is @annalou8.