Two men robbed a bank and then holed up at a bed and breakfast in nowhere Iowa. The place was called The Andromeda Inn, and the owner didn’t believe in electric lights. He wore a mustache and said they polluted the air. They caused cancer. They made cars swerve through guardrails and drove whole herds of cattle insane. The rooms were stocked with candles, but at night, the two men would blow them all out and then close the curtains and play Marco Polo in whispers and sighs. When they found each other, they’d grab for anything they could. Ears. Hands. Asses. Whatever there was. Whatever was there. Then they’d grapple and twist and tumble into the darkness, hoping like hell they’d hit linen, that they’d land dead smack in the middle of the bed. Somehow, they always did, and once there they’d talk about tallow and spermaceti and Cetus outside the window there and also how many candles was old Moby Dick. One of them might say something like, “It won’t be long before some asshole turns us in, and maybe we should get moving,” and the other would reply, “Or maybe things will be better in jail” because they wouldn’t rat. They’d end up in the same cell block, maybe even the very same cell. Guys would come in and ask for favors, and nobody would fuck with them, and they’d be kings of the joint, wild-eyed and legendary and uncivilized. Then, they’d fall asleep. The galaxies would swirl overhead. They’d dream about waves on rocks and a naked woman screaming, and then they’d wake up, wet and cold, sometimes holding one another’s hand. 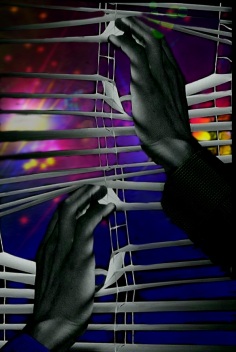 It took maybe a fortnight for it to happen like they said. The owner, or it might have been some tenant, some sleepless drifter, some straitlaced cowboy finally cracked. The cops pulled in around 2AM, and you could see the blues and reds for miles, and to this day there’s folks out in Whittemore, they swear it looked exactly like the northern lights.

The men went quietly. They were loaded into separate cars. Except some rookie parked them side by side, and it looked like the two of them were sending signals with their eyebrows, and so the lieutenant stepped in and pulled one of them around to the back. The building faced farmland. Soybeans. The owner was taking out the trash, and he nodded at the lieutenant. He shielded his eyes. He thought, maybe they’ll execute them. Maybe they’ll use the chair. And then stories will spread, and people get curious, and all that voltage? Maybe it ends up good for business after all.

Brett Biebel teaches writing and literature at Augustana College in Rock Island, IL. His (mostly very) short fiction has appeared in Chautauqua, SmokeLong Quarterly, The Masters Review, Emrys Journal, and elsewhere. 48 Blitz, his debut story collection, was published in December 2020 by Split/Lip Press. You can follow him on Twitter @bbl_brett.