One night, my husband Joel accused me of making something out of nothing. When I tried to deny it, a small, solid, glowing orb appeared floating in front of me. Bewildered, excited, I raced to show him the anomaly. The bedroom door was locked. He was giving me space, he explained, so I could stop hyperventilating and acting like our fight meant the end of the world. 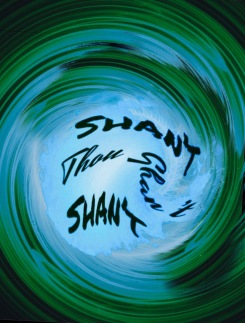 I asked the small people inhabiting the orb if his actions were reasonable. I tried to explain my side of the story to them, but I’ve always had a hard time making my point when I was upset. Several inhabitants listened. They became messengers and transcribed everything into rules for their own civilization: thou shan’t patronize, thou shan’t interrupt the Word, and thou shan’t say I’m overreacting because I’m not.

That Monday, I took the orb to my old university. I asked my ecology professor, Dr. Thompson, if there was any scientific significance to it. She bobbed it up and down in her hands. “You made this?”

Worried it might break, I begged her to be gentle. She asked how I formed it, but I wasn’t entirely sure. The messengers said the beginning was void, followed by a terrible sound that came into existence by a lump stuck in the throat, and that lump was their home, and the terrible sound created their people. I had a lot of clarifying questions about this explanation, but couldn’t bring myself to ask. They probably thought I knew more about it than them, and I was scared to seem dumb in front of people who called me “Great One.”

After conducting what she described as rudimentary studies, Dr. Thompson offered me credit as a contributor on the paper she wanted to write on it, and soon my email was flooded with CC’d conference invitations from California, Japan, Dubai. Years down the line, Dr. Thompson called at 6:24 AM to extend an invitation to Sweden. I rolled over to tell Joel, too tired to remember we’d recently agreed that a break from each other—just for a while—would be best.

“You have to learn to let the little things go,” he said to me.

I wanted to explain: It’s like my head contains the perfect medium for sound. Everything big and small echoes forever at the same volume. But I didn’t. I invited him as my plus one to the Nobel prize ceremony. We sat together and made small talk. Time slowed, felt less and less linear; the first cocktail disappeared into the third. Applause rose as the winner was announced, and Dr. Thompson allowed me to hold the orb for pictures with the press. I kept glancing at Joel, who tried his best to look happy.

Meanwhile, in the storm of questions and firing flashbulbs, my little world glowed brighter than ever. It was a moment with so much noise and light that the messengers would jump to conclusions (a form of divination they’d adopted) and call the ruckus the Apocalypse.

Ethan Leonard is a graduate of the University of New Hampshire’s MFA program. Their work is forthcoming with Cotton Xenomorph, and has been included in Five on The Fifth, Reservoir, Kaaterskill Basin Literary Journal, and others. They’re working on longer fiction and tweeting inconsistently at @autonomousbagel.