Afterwards you have these fantasies of him tracking you down and finding you. Opening your front door, and he’s standing there. And you think about what you wished you had said but didn’t before he walked away in the cold, white morning air.  In your bedroom in another city, when you are looking in the mirror at the two fingertip-sized bruises on your chest, you wonder if you left any marks on him that he is still considering in long, slow moments, too.  And you think about what you knew when you were 25, and what you know now that you’re 40.

You can’t recall the experience in a linear way, just in flashes that are doorways to longer remembrances. Like how the first thing you did when you were alone with him was to press the release valve over his heart and listen quietly while he spilled words that came out trailing dust from being held in for so long, subtly coated in disbelief that someone could do this, one random night at 1 a.m. in a nightclub.

After the last dusty words come out, he says, “When I found out you weren’t from Edinburgh, it made me really disappointed, because it meant I can’t be with yeh, can’t marry yeh.  You’re exactly the kind of woman I’ve been lookin’ fer… You really listen to me, and you really look at me.”

You don’t know what to say to this, even though you’re forty, because he has really looked at you, too; and because you’re forty, you know in a more statistical way about the rarity of lightning strikes to the heart. And then he puts his arm around you, and you can’t resist this.

Of course you didn’t take any of it seriously at first, when you sashayed like a fairy drunk on absinthe up to the table of four young men to ask for a cigarette, and they say that the price for this is to sit down and have a chat with them.  You slide into the booth, tipsy, malleable and delighted to play the game.  You say, “How old are you all?” and they say “Guess,” and you say “21,” and this makes them puff up indignantly like chickens and squawk, “25!”

You throw your head back and laugh, then shake your head and say, “40.” You watch their faces, and your eyes are still laughing, knowing that you have just announced a power they were not expecting you to have.

Then their leader – of course he was their leader –  retakes control and quick-fires a volley of questions …where are you from, why are you here in Edinburgh, what do you do, what do you think of Scotland, have you ever been here before…  And you answer, going right along with the rhythm he has set, but you notice right away that he is thinking about you on two levels.  On one level he is effortlessly directing the release of information and snapping your focus back to him if any of his friends try to engage your attention, and on the other, quieter level he is looking hard at you, harder than anyone has looked at you in a long time.

So you look at him, and he looks at you, while your mouths go talk, talk, talk, but you both know about the two different levels.  At some point, his friends leave the booth, and you are by yourselves, but this doesn’t feel like a change.  They drift back at some point, and he looks up at them and waves them away.  You have also decided about him by this point, and so you go to get your coat.

You walk into the tall, quiet house, the other bodies in the house asleep upstairs, and you are thankful for the dense Georgian build of the place and that you’re staying in a downstairs bedroom.

You don’t fall against each other in a passionate crush right away, because something else larger, something unusual, is happening, and you both know it.  So you take your coats off in the hall and lay them neatly on the monk’s bench next to the grandfather clock, the rustles loud in the night-time silence.  You go into the kitchen and turn on the light. He follows and sits down at the table. You sit across from him. You let him look at you. 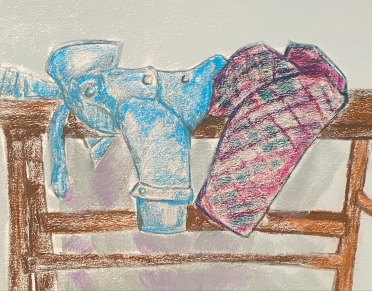 Joy Martin is an American writer based in Cambridge, UK.  She has recently completed her first novel, Stars Light the Dark, for which she is currently seeking a publisher. She also writes about the arts for Exeunt Magazine and The Stage (London), as well as being published in American Theatre magazine (New York). More of her writing may be read at mirrorlamp.co.uk and to follow her on Twitter: @mirrorlampjoy.