It is the summer I lose my smile. My brother and I stand by an old tree with roots like hands. Dad says the fingers are our ancestors reaching to pull us to Hades. He has his myths confused. My brother is sunburnt and squeezes my hand so tight his knuckles are white. Or white is the color I imagine in the photograph. I do not smile. Days before I lost my front teeth when my brother slammed his baseball bat into my face. My bottom lip is split open, but I cover it with my top lip so I look like a fish or a mythical creature Dad has invented a life for. My face is puffy and too big for my body. My brother’s in wait, stuck in the moment before he pulls me under.

My brother’s tongue is split nearly in two. The monkey bars where he fell after hanging upside down for too long are not shown and never visited again. A hot day where red soil swarms like locusts. Dad is gone again, and it’s been a long time since we’ve seen Mom cry. In the waiting room where they leave me, I move my tongue from side to side in my mouth while looking at the cute boy in the poster of coughing people. This is before words like straight and gay matter. My brother’s tongue grows bubbles of blood he breaks open with his teeth and spits on the floor.

Hyacinth and Grief in the Bath

My brother and I are naked in the bath. Mom shows my first boyfriend who says look at your little red penises. I’m thirteen when another boy sees me naked for the first time. All he can ask is why is your brother named Grief. “Isn’t it obvious?” I say. So many terrible things Dad has left me with, my brother one of them. I want to burn the photograph, but Mom keeps it locked away in her room to show my future boyfriends. My brother says boys don’t kiss other boys. He tells everyone he knows. He says they found me on the side of the road, nursed me back to life. My name is Hope, he tells them. “A joke, don’t you get it?”

This one in a medical book. The only proof of my brother’s tail from when he was born, before it was removed and he was left with his brand shaped like a peppermint swirl. Dad saved the book like a trophy. Over the years I have given my brother names like Wicked and Despair. I read about vestigial organs, useless things that once made a difference. As embryos we all have tails. I focus on the word gestation. My brother gestated in Mom’s belly from the ash Dad put there. It’s the one myth that sticks after Dad leaves for good. In the book, there’s a before and after photograph. My brother is referred to as Child G. One brother born normal years earlier, it reads. 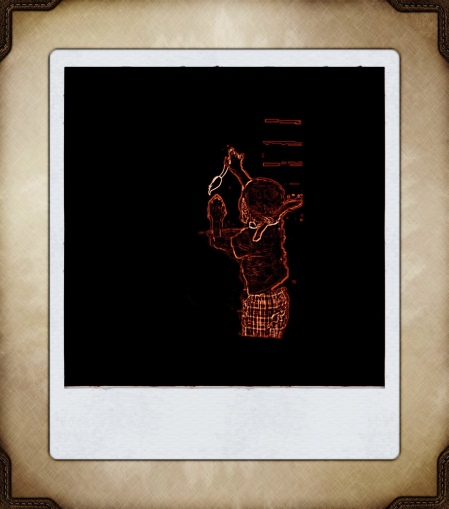 Nicholas Cook writes things sometimes and lives in Texas where it’s mostly hot. You can find him at @thisdogisdog.