When the dead rose we expected Armageddon, apocalypse, or at least a little anarchy.

What we didn’t expect was:

Marjorie Robinson stands behind me in line at the supermarket. She holds a wire basket between her lean white fingers, drumming the various tins with a clink clank. Bone on metal. When I first saw her, I only knew it was her by the dress. Hers was the first open coffin I’d ever seen and she’d chosen her final outfit well, a delicate boho style that made her look like she was off to a mid-Summer folk festival and not to … wherever she has been. I quite like having her back around, truth be told. But I can’t blame her husband for leaving.

You see, the problem was, for all we wailed and railed and sobbed and begged, for all we missed them – we didn’t want them back.

They made us uncomfortable. They divided us. Dead refugee camps popped up, then hostels, then eventually schools, cinemas, restaurants (even though we never see them eat).

The children are the worst.  Some were reunited with grieving parents, others placed with childless couples. A baby forever. Silent. No need for feeds or nappy changes. It’s too much for me.

A few splinter groups put up a fight, with protests and banners and the odd march and such, but really what could they do – kill them again? In the end most of us just made room for them. Literally. People moved out of their homes to allow the previous occupants to return. Or shared, for those that have the stomach for it. They don’t speak after all, just go about their business, much as they did in life.

I’ve finished my packing and wait for Marjorie Robinson. We always used to walk home together so why wouldn’t we now? She packs her tins into her bag for life then nods at the cashier. We don’t make them pay, it’s the least we can do. We link arms as well as we can and walk home to our street, the sun shining down on our faces, my skin and her bone. 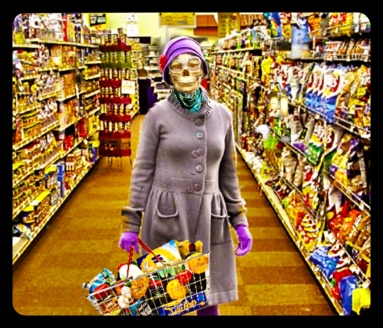 Gaynor Jones is a freelance writer from Manchester UK. Some of her stories can be found in Ellipsis Zine, The Occulum and Flash Frontier. She tweets at @jonzeywriter.