Her garden is one hundred shades of suburban green, prison drabs of another hue. She wakes on Sunday to the drone of a lawnmower, thinks of Virginia Woolf and the desperation of her Richmond life, then drowns herself in sleep. When she wakes again, gets up, a yellow-eyed wolf is sat in the garden. He lifts his huge head, tilts it to the bedroom window, to this girl behind glass, and howls. No one else hears it, but all day her mind is full of snow and woods and the wind on the Steppes.

Her husband wants a baby. “That room beside the landing would be perfect as a nursery,” he says, and she knows in his head the walls are already pale rose with a downy head nodding in a cradle.

That night, the wolf comes to her. His breath is hot on her cheek. He tells her: come with me 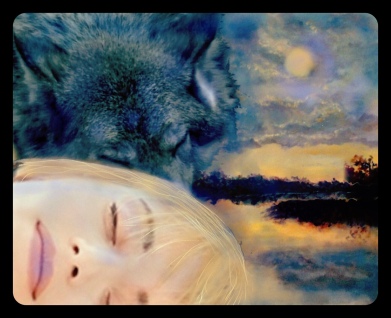 She had a dog as a child. His fur blew in the breeze like black feathers and he wore a red collar. Sometimes he would dig in the dirt, furious, then her mother would wash him, rinse the dirt from his paws, while he sighed and resigned himself to the towel.

“I don’t think a dog’s a good idea,” her husband says. The light is cool and pale as porcelain in the kitchen. Every surface is empty.

“A dog would be company for me while you’re at work,” she says, and he smiles, touches her face, tells her she’d have all the company she could handle if there was a baby.

Each night the wolf comes to her. His words are the distant roll of approaching thunder.

Come with me and together we will slip past the tame boundaries of park and pavement, to find the wild woods where once all wolves could roam

The bed sheets tangle round her, cotton briars.

We will put our noses to the scented ground and follow its thousand signposts: here fox, there deer; in this place a rabbit hopped slowly forward beneath the moon’s unblinking silver eye

She stops sleeping, waits instead for the coarse brush of his pelt, rust red and grey.

Tuesday, there’s a minor collision at the road end. Raised voices and the diamond dazzle of shattered glass. Two more hours til lunchtime, so she dozes on the couch, the ice in her drink dissolving second by slow second.

“How long will dinner be, honey?” He’s checking his wristwatch, like that’s what is wrong in this situation. This empty table scenario.

They had met at a conference. Standing in line at the buffet table, she had noticed his muscled forearm, the broad, well-shaped fingers, had imagined them pressing into the flesh of her thighs. The thought had flashed across her synapses like summer lightning. Later, as though he had intuited this, he had sought her out.

She thinks now of that night, of the sex and the talk afterwards. The lazy coil of cigarette smoke in the hot velvet dark. Sweat cooling on their skin.

The wolf is cordite and lightning, thunder and leaving. She tastes it on her tongue.

Come, come now, and hunt with me to know the blind pleasure of running, heedless of catching thorns, in pursuit of some creature of fur and fear that leaps just beyond reach

The night air is cold. Gooseflesh stipples her skin but already she has forgotten how her bed feels. The wolf’s eyes are Aztec yellow.

Together we would feel the rushing earth pass beneath our feet. We will stand together, sides heaving, and howl into the endless blue ink night. There would be forgetting. You would remember who you are

She turns back and no longer knows which house was hers. Each one turns its blank, shuttered face away. Then she vanishes, smoke drawn up a chimney stack into the spreading indigo light of dawn.

She remembers who she was. Who she is.

Liz Falkingham Temple is a journalist and writer based in rural East Yorkshire, England. Her work has appeared online and in print, including in the latest Bath Flash Fiction anthology, and she was shortlisted for the Oct 2017 Bath Flash Fiction Award. She can be found on Twitter @JournoLizF.